I go into FedEx a lot. At every FedEx in the country, they place these really unhealthy snacks at the counter. Namely, those really good-looking but surely-disappointing white chocolate covered pretzels, Flipz, are always sitting at the counter for purchase. They are strategically placed, of course, so that when a busy businessman or woman waiting in line at FedEx sees those bags of Flipz he or she will say to him or herself: “Damn. I am hungry. Those look delicious. Convenient. Unhealthy, sure, but I deserve it! Might as well…” And every time I am in a FedEx, I see those Flipz and I think: “I’m better than those people. I am fighting the urge. I won’t succumb to the man–to the subconscious of business and consumerism.” And I never do.

BUT, the other day I came across the most genius item placed at the end of a checkout line that there was no amount of will power in all of the galaxy that would stop me from giving Target more of my money. That’s right. I was a victim of a check out purchase. It wasn’t Esquire, it wasn’t chocolate, it wasn’t a pack of triple A batteries that I realized last minute I probably needed. Instead, it was a pocket-sized package of 44 pieces of Legos that, when put together via included instructions, becomes a minature TIE Fighter.

That. Is. THE COOLSET. Peeing-your-pants kinda cool.

So I bought it. And I thought: “Man, if only they had this when I was a kid.”

I remember when I was around the age of 11 or 12, and it was becoming increasingly evident that playing with action figures and toys was no longer as socially acceptable as it was in elementary school (in addition to it losing its luster, so to speak), I started to see toys in the store that I wish I had when I was younger (at 11 or 12, I thought this!). All of the sudden, squirt guns and NERF guns were electric and had laser pointers and could penetrate walls (maybe not). Action figures could move their elbows and fingers! Lightsabers could really light up! Things were getting cooler and, as I was breaking into the teenage atmosphere, I was getting lamer.

Now here I am, 22, lame as ever, but that TIE Fighter at the checkout line at Target looked so cool. I bought it, assembled the 44 pieces and now I have this really cool TIE Fighter sitting on my desk, proving that I might still have that part of our soul hanging around deep within me. Like Darth Vader still had some good in him, I’ve still got a little kid Kale in me that appreciates a cool action figure or Lego. We all lose that part of our soul when we go from childhood to adolescence. It’s inevitable, but we cling to it just a little bit. It’s that part deep in our soul that makes us cry at the end of “Toy Story 3”.

This TIE Fighter is bringing up memories. Here’s a toy story for ya:

When I was younger, I wasn’t really into Legos THAT much. For me, it was work. When I would get a Lego Star Wars toy, I just wanted to have it made already so I could jump right into the world of a Galaxy Far, Far Away. To me back then, having to build a toy was like going to a restaurant and making your own food. The stuff I was really into back in my toy-playing hayday were Micro Machines.

Back in the early 90’s, Star Wars as a relevant franchise was starting to make its way back into mainstream culture with Timothy Zahn’s post-“Return of the Jedi” blockbuster book, “Heir to the Empire”, Lucasarts pumping out hit Star Wars video game after hit Star Wars video game (and even non-Star Wars video games), and Kenner couldn’t keep up with action figure demands, so they sold their Star Wars rights to the toy conglomerate, Hasbro. Hasbro also bought Micro Machines—a line of toys that were, well, micro. And they did them for Star Wars. They had these versions of Micro Machines that were “big” Micro Machines. And they were the absolute best. It was perfect for my little hands. I liked it because the design/colors were true to the films, and I could use the lens that was my eye, the model rig that was my hand and arm, and the green screen that was the vast space of my home and backyard to take my X-Wings, B-Wings, mini Lukes and Artoos on new adventures—suddenly my bathroom was the inside of a Star Destroyer or my white carpeted living room was a battle on Hoth. I realize now that what I was doing was creating new Star Wars stories and using the Micro Machines to visualize the stories playing out in a cinematic way. Amazing how toys can inspire us as children, in ways we don’t fully understand at the time.

I will never forget my first Micro Machine Star Wars toy. It was Pesach and I was 5 or 6. My brother and my mother were headed for a trip to Cleveland together. I think I may have been a little jealous, or something, so as emotional collateral, my parents decided to buy me a new toy. I don’t think I asked them to get me anything because I remember being very surprised about the whole thing. They got me a Micro Machine X-Wing. It’s still the greatest toy I ever received (and maybe the greatest thing ever given to me as a child. Rivaled only by the 1997 PC game “Star Wars: Dark Forces II – Jedi Knight”. That’s a blog post for another time).

The day I got it, my brother and my mother went off to the Mistake by the Lake and my dad and I were left at home. But I was no longer full of jealousy, for while my brother was getting a glimpse of all of the wonders of Lake Erie, I was traveling to Dagobah with the tiny Luke and Artoo that came with my new toy. To make things even better, my dad wanted to take me to McDonalds for lunch that day. My mind lit up. Sure, I wanted a milk shake and one of those delicious Micky D’s grilled cheeses, but think of all that could be done with my new X-Wing on the play structure! I begged and pleaded and my father let me take my brand spankin’ new X-Wing to McDonald’s with us.

My X-Wing—well…it never made it to the ball pit. I don’t know if I was multitasking with a grilled cheese or was going greater than .5 past lightspeed, but somewhere along our lunch at McDonald’s, my X-Wing dropped all 3 and a half feet of my height to the hard, cold ground of the McDonald’s tile floor. Crack.

In the same day that I got the greatest toy in the world, I broke it. Now, it was one canon short of an X-Wing. One of the guns had broke in half. This moment was terrible for me. I’m not sure how much longer after my Micro Machine was replaced, but I know that at the time it seemed like an eternity. Later on, I would amass a small rebel force of Micro Machine vehicles, but then and there, I felt like Luke at the end of “Empire”.

What’s crazy is that X-Wing and reckless mistake of dropping it stil haunts me to this day. We have a box full of “Star Wars” toys in my basement. The other day I went to look through it. There was a bag in there labeled “junk”. And sure enough—accompanied by some dog-chewed action figures—that same X-Wing rests in piece, that same, snapped cannon still attached to the wing. It’s there as a symbol of all that once was. That one day at McDonald’s. Turned to tragedy. 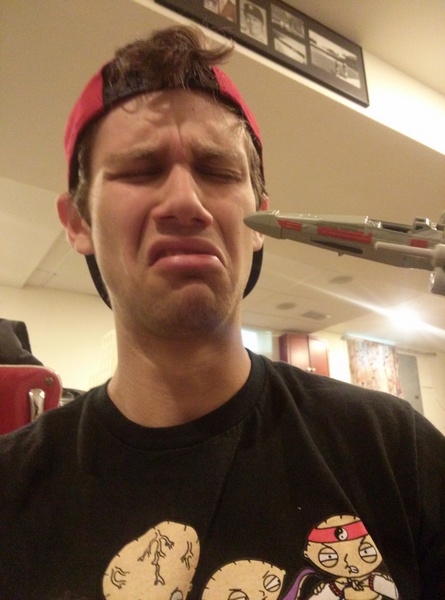 The power toys have on a child’s heart. It’s a memory I see in my head so clear, as if it were this morning. Sometimes I wonder if it was one of those pinnacle moments that changed the course of my life forever…

…or maybe I got over it pretty quickly.

Kale is a proud MSU Detroiter with filmmaking and social media aspirations. Currently in Production Assisting Purgatory, Kale has two goals in life: (1) Have a million followers on twitter and (2) Never pay a mortgage. So help Kale reach one of those goals, follow him @kaledavidoff
View all posts by Kale →